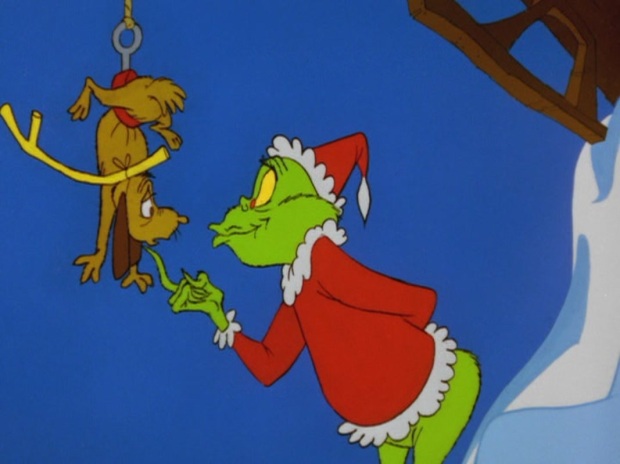 We’re officially one week into our Virtual Musical Advent Calendar, so now seems as good a time as any to indulge in a little Bah Humbug.  And what better song to tickle that itch than Albert Hague’s You’re A Mean One, Mr. Grinch?

Before we dive in, here is my favorite version of the song by Sixpence None the Richer to get us started:

As you probably already know, Mr. Grinch was the montage song used in the 1965 television special How the Grinch Stole Christmas; as you absolutely already know, that special comes from Theodor Geisel/Dr. Seuss’s 1957 classic children’s book of the same name.

In the special, the song plays as we see the titular Grinch systematically pilfering or destroying everyone’s Christmas preparations. Its basso profondo melody is sung by the fantastically and improbably named Thurl Ravencroft,  and it contains one of the least likely and most awesome lines in any Christmas song ever:

The three words that best describe you

Are as follows, and I quote:

And for that matter, “your heart is full of unwashed socks” ain’t too bad, either.

To me, the song always felt right, as if it had always been a part of the original book that I loved so.  Part of that was the spirit of the piece, sure, but there was something else I could never quite put my finger on.  Perhaps you have felt the same thing. It wasn’t until I got to college before I finally figured it out.

It was during my annual re-watching, during my sophomore year, when I happened to be taking classes in both classical poetry and music composition, when the penny finally dropped: Hague purposefully composed Mr. Grinch to be sung in anapestic tetrameter, which is the same rhythm used in almost all of Geisel’s Seuss books.  Since then I’ve periodically looked in various biographies and Christmas song histories to see if this was something done on Geisel’s insistence, or if it was Hague’s idea, or if it was what director Chuck Jones wanted. Alas, it appears this detail may be lost to history. Whichever one of them came up with the idea, however, it’s bloody brilliant.

Mr. Grinch is also notable as an example of a growing trend within the holiday music canon: the adoption of supporting numbers from 1960s and 1970s Christmas TV specials into the fold.

These days, if Hollywood wishes to cash in on Christmas, it puts out a movie — but this has not always been the case.[1] Prior to 1990’s Home Alone, movie producers mistakenly believed that unless your corporation was founded by a dead man currently held in icy suspended animation, family movies were destined for financial failure. The obscene amount of money made by Home Alone changed that, however, and over the past two decades Hollywood has seen fit to pump out all kinds of really, really terrible Christmas movies each year. (Let me say that again: really, really, really terrible.  And we’re all going to agree right here and now that this never, ever happened.)

But when I was growing up it was the annual Christmas television specials that we all looked forward to each year. Rudolph was the first; A Charlie Brown Christmas and Grinch soon followed. All three were huge ratings successes. (They are also easily the best of the lot by far.) Smelling easy money, TV began cranking them out regularly: Frosty, Santa Claus Is Coming to Town, that thoroughly depressing The Little Drummer Boy special where you get to see a small boy beaten repeatedly by adults, and a ton of other largely forgettable offerings that began showing up each year. A great number were made by the now-defunct Rankin-Bass Productions and featured Animagic!, a stop-motion animation process which produced clumsy, hurky-jerky, bizarrely-moving characters.

Over the past ten years, supporting songs from these specials have been popping up on holiday albums with ever-growing regularity, especially with the indie-artist crowd.  Mr. Grinch is the one that appears most these days, but there are others.

My absolute favorite of these — after Mr. Grinch, of course — is the Big Bad Voodoo Daddy cover of Mr. Heat Miser, a song from the hideously terrible The Year Without Santa Claus.

Still, there’s one conspicuous Christmas-special song, however, that has been curiously and unjustly neglected by this trend. I desperately hope that indie artists will take note and begin trying their hand at the other song from the How the Grinch Stole Christmas TV special: Welcome Christmas.[2]

It’s such a perfect song for the season, and it so hits the heartstrings of anyone who’s seen the special. And for those obsessed with trivial details, there’s this: the lyrics from the Welcome Christmas refrain are the only part of the narration read by Boris Karloff that do not appear in Geisel’s book. I can’t figure out why that song keeps getting ignored. Some talented indie musician needs to step up and get the ball rolling.

I’m looking at you, John Shipe.

[1] There are plenty of classic Christmas movies that were made prior to 1990, of course, but they were relatively few and far between.  They were also largely made for adults rather than children, even though many of those, such as It’s A Wonderful Life and White Christmas, have evolved into obligatory family-viewing affairs over the years.

[2] If that title doesn’t sound familiar, it’s the song the Whos sing that starts out, “Fahoo Fores, Dahoo Dores.”  You know the one.[3]

[3] And yes, before you ask, Welcome Christmas is also written in anapestic tetrameter.