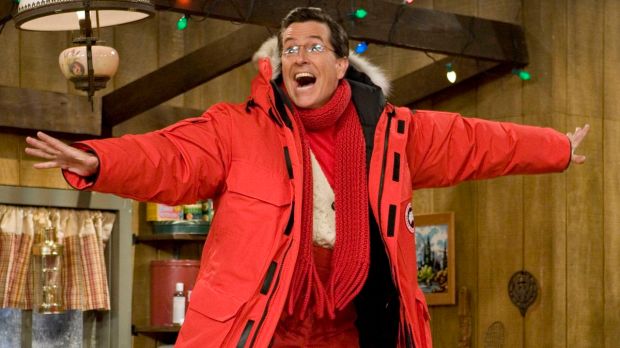 One of the more modern wrinkles to the Holiday-canon effort is the “funny/novelty” Christmas song.  Unfortunately  — and probably predictably — funny/novelty Christmas songs are usually quite terrible. More than that, they’re often embarrassing, offensive, or both. But it has become such a pervasive sub-genre that I feel the need to at least acknowledge it in this Advent Calendar.

To get us started, let’s kick this post off with a sub-genre entry that actually works, Stephen Colbert’s Another Christmas Song:

Penned by Fountains of Wayne bassist Adam Schlesinger, Another Christmas Song works because it’s not a parody of Christmas so much as a parody of people trying cash in on it. It’s also a pretty deft piece of songwriting, arranging and performance. A pastiche of the 60s-era Sinatra holiday albums, the instrumentation itself is a pitch-perfect homage to Nelson Riddle’s Ring-A-Ding-Ding stylings.  Colbert even slightly exaggerates his enunciation, which giving the lyrics some Sinatra-esque phrasing.  Plus, the lyrics are fantastic:

Reindeer ringing in the mistletoe

The manger’s on fire,

The tree is frozen, the winter’s bright

Who’d have thought the wise men looked so white!

There are a few other songs that fall into the “funny” category that are well worth your time.  Many of these take some black-humored joy in slapping St. Nick around. In The Kink’s Father Christmas, Santa is robbed by street toughs.  This is played for laughs, and then at the end it becomes a song with a message. Surprisingly, this somehow actually works.

Kris Kringle receives far worse treatment in Danny Elfman’s Kidnap the Sandy Claws, a number from The Nightmare Before Christmas that features naughty children contemplating the methods they might use to torture, dismember, and dispose of Santa.

And in Bizarre Christmas Incident, it isn’t enough for Ben Folds to simply kill the man in the red suit. He has to do so in the most undignified manner possible. (Please note that this last one is NSFW, and is really, really dark; definitely not for everyone.)

For the most part, however, the funny/novelty Christmas sub-genre is dreck — which is not to say that it’s unpopular. The Singing Dogs recording of Jingle Bells was actually a hit record, as was Yorgi Yorgesson’s I Yust Go Nuts At Christmas, despite the fact that each is a veritable crime against humanity. I Saw Mommy Kissing Santa Claus is not nearly as darling as it thinks itself. Grandma Got Run Over By A Reindeer feels like a rejected Hee-Haw skit. And listening to The Chipmunks’’ The Christmas Song (Please Don’t Be Late) makes my teeth hurt.

As dreadfully terrible as the funny/novelty Christmas mega-hits are, they don’t hold a candle to the ones that bombed: Have a Cheeky Christmas, RuPaul the Red-Nosed Drag Queen, Heavy Metal Christmas, Redneck Twelve Days of Christmas, Dominick the Donkey, Please Daddy (Don’t Get Drunk This Christmas), What Do You Get a Wookie for Christmas.  Listening to each is like driving past a grisly auto accident. You desperately want to look away, but somehow the sheer horror of it all compels you to stop and focus. “Oh my God, how could anyone have let this happen,” you hear yourself saying over and over as each number plays on.

Still, as bad as each of these songs might be, at least none of them is Tiny Tim’s Santa Has Got the AIDS This Year, which just might be the most poorly written,  the most annoying, and the most offensive holiday number of all time.  It’s probably wrong to give someone the title of Worst Human Being Ever simply for writing and recording a song, but Tiny Tim makes it pretty damn tempting.