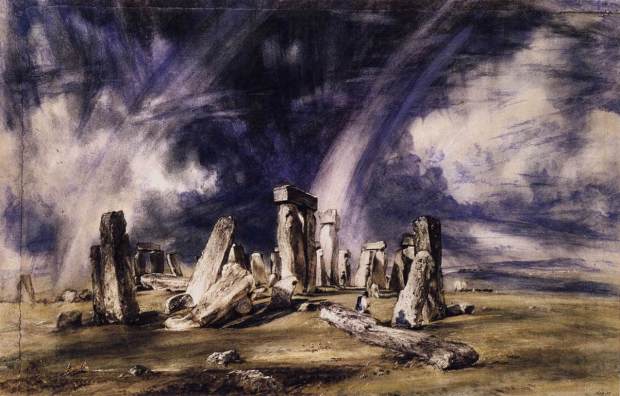 Today’s listed song is The Holly & The Ivy, but in honor of the Winter Solstice I’m actually going to share several songs with you. These songs represent the growing resurgence of those wonderful old carols that blend the imagery of the Christian nativity with old English paganism and, in many cases, literal blood sacrifices to the gods.

In the forests of England, The Holly & The Ivy’s titular plants are noticeably distinct in that they do not lose their deep color in the snowy winters. Because of this, holly in particular was considered sacred to the Druids. Its leaves’ evergreen nature represented the hope for continued life through winter’s scarcity; its crimson berries were a reminder of the human and animal blood sacrifices they performed to the gods in order to ensure that life.

When the Christians arrived, the Druids took their concept of an approaching salvation and incorporated it into their already existing celebration of the solstice’s similar promise. The holly you decorate your home with, therefore, is a memento passed down over a millennium that originally symbolized the sacrificing of humans and animals to appease the various gods of winter. In the classic carol The Holly & The Ivy, however, that blood sacrifice has been transferred to the babe in the manger that we celebrate on Christmas.

Here is a great version by Annie Lennox:

The Boar’s Head Carol is another Christmas song that focuses on the English history of blood sacrifice on the solstice. In this case it is the traditional sacrifice of the wild boar, whose severed head was presented in lavish ceremony at pagan and yuletide feasts.

As you might imagine, there are countless versions of The Boar’s Head Carol that evolved throughout England, Scotland, Wales, and even Ireland. Here is the version recorded most these days, in this case by the Chieftains:

While The Boar’s Head Carol and The Holly & The Ivy take their blood imagery from the Pagans, The Coventry Carol’s sacrificial imagery comes straight from the second chapter of The Book of Matthew.

The song is a mournful lullaby sung by a mother to her son, as she awaits Herod’s ordered Massacre of the Innocents, the infanticide meant to kill the prophesied Jesus.

Like most other carols, the exact origin of The Coventry Carol has been lost to history, and the version we know today is the result of centuries of evolution by way of folk tradition. We do know that the first known manuscript of that version was first recorded by Robert Croo in 1534. (There are many other lesser-known surviving versions of The Coventry Carol, however.)

The Coventry Carol is traditionally sung a cappella, but modern artists such as Loreena McKennitt are recording the carol with instrumentation:

Lastly we have Jesus Ahattonia, better known as The Huron Carol.

The Huron Carol is actually a bit different from the above selections, in that it’s not a folk song that evolved over time in England.  Rather, the French Jesuit (and eventual saint) Jean de Brébeuf wrote it while on mission in Canada in 1642. Still, Brébeuf’s carol is an interesting listen when juxtaposed with its cross-Atlantic cousins.

Just as his forefathers incorporated Druid traditions into their ministries’ conversion stories, so too did Brébeuf incorporate Huron mythology to appeal to the tribes to which he ministered. He wrote the song in the Huron language, but below is a bit of the English translation. As you will see, Brébeuf mixes elements of Native American life and culture with the classic Christian nativity scene:

Within a lodge of broken bark

The tender Babe was found,

A ragged robe of rabbit skin

But as the hunter braves drew nigh,

“Jesus your King is born, Jesus is born,

The earliest moon of wintertime

Is not so round and fair

As was the ring of glory

On the helpless infant there.

The chiefs from far before him knelt

With gifts of fox and beaver pelt.

Jesus your King is born, Jesus is born,

Here is my favorite version of the song, sung in the original Huron, by the great Bruce Cockburn.