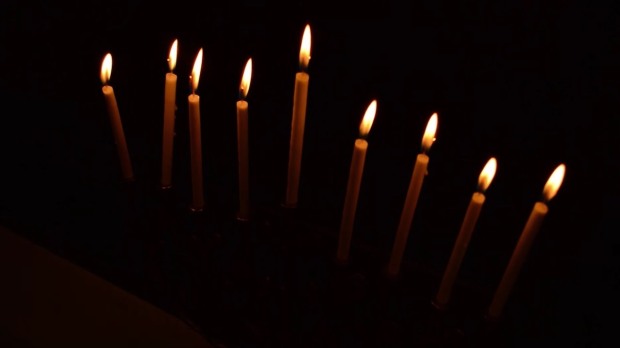 In order to help celebrate the first day of this glorious festival of lights, today I want to talk about the song Oh Hanukkah.

There are two questions that always come to mind when Oh Hanukkah pops up on my Holiday playlist shuffle.  The first is, “How can anyone listen to this song and not get up and dance?”  The second is, “Wait — isn’t it a little weird that this song is on so many recent Christmas albums?

One of the more interesting (and best) trends in holiday music over the past decade is the growing number of Christmas albums that feature songs acknowledging and celebrating Hanukkah. I am not entirely sure why this trend started. There have always been a ton of Jewish artists recording Christmas albums — Barbara Streisand, Sammy Davis Jr., Bette Midler, and Neil Diamond, to name but a few artists who have recorded multiple Christmas records  — but until recently none of them ever bothered (or was permitted) to add Hanukkah songs. So why now?

I honestly don’t know. The lack of even a few Kwanza ditties here and there suggest this movement isn’t forced multiculturalism. And throwing a lone Hanukkah song between a dozen songs about Santa and the baby Jesus seems a dubious method for boosting sales among the Chosen People. I might guess that it was an simply an acknowledgement of Our Shared Judeo-Christian Values, except the people who go on and on about Our Shared Judeo-Christian Values are usually the same people who  argue that putting a Hanukah song on a Holiday album is part of the War On Christmas. So to tell the truth I’m really, really baffled as to how this trend got started.

Whatever the reason, however, you’ll get no complaints from me. As anyone who’s ever attended a Jewish wedding can attest, Jewish celebrations always seem cranked up a few notches higher than everyone else’s. These new Hanukkah numbers are often the most fun tracks on their respective albums. And, out of all of them, none appears as often as Oh Hanukah.

The tune of Oh Hanukkah is based on an old Jewish folk song.  Just how old it might be I have never been able to determine. (It goes back at least to the 19th century, as the classical composers Hirsh Koypt and Joseph Achron each incorporated it into separate folk-inspired pieces in the early 20th century.) Most places I have gone to research Oh Hanukkah’s origin seem equally unsure of its history; the one thing they do all agree on is that the song is not nearly as popular in Israel as it is in the United States.  And when you think about it, this makes perfect sense.

For Americans, Christmas is the 900 lb gorilla in the holiday ballroom.  It simply dwarfs everything else throughout the calendar. It’s literally impossible to escape its clutches the entire month in between Thanksgiving and December 25. Many retail stores now start putting up some early yuletide decorations as early as September. Hanukkah, by contrast, is a relatively minor holiday in the Jewish calendar. The entire practice of giving Hanukkah gifts is in no small part a way to placate children who watch their neighbors and classmates regularly rack up the annual loot from St. Nick. So it makes sense that in a country where the Christmas-Everything-Everywhere-All-The-Time Level is dialed down to a Far-More-Sane Level like Israel, a song celebrating a minor holiday would score a bit lower in the folksong rankings.

Interestingly, some of the Jewish artists who are adding Hanukkah songs to holiday albums are embracing the popularity chasm between Christmas and the Festival of Lights.

For example, there’s the band The Leevees, an all-Hanukkah-music band made up of members of the indie bands Guster and The Zambonis. (And yes, before you ask, The Zambonis are a post-punk rock band that records nothing but songs about hockey, thank you very much.)  A lot of their recordings seem to be in high demand for Christmas compilation albums these days, but none more so than their song My Goyim Friends.

And when Adam Schlesinger, the Jewish bassist who pens half of the songs of Fountains of Wayne, was hired by Stephen Colbert to write an album’s worth of original holiday songs for A Colbert Christmas, he gave us Can I Interest You In Hanukkah? In it, Schlesinger satirically pokes at both the folly of middle-class Jewish-American’s attempts to compete with Christmas head on and middle-class Christian-Americans ignorance and disinterest in anything that isn’t about themselves. Plus, for what it’s worth, I think Can I Interest You In Hanukkah? is my younger son’s favorite holiday song of all time.

Just as the Christmas and the holidays themselves are better when they’re as inclusive as possible, so too are Christmas and holiday albums.  As I said, I’m not sure why this recent trend of Hanukkah songs on Christmas albums started, but I very much hope it’s here to stay.