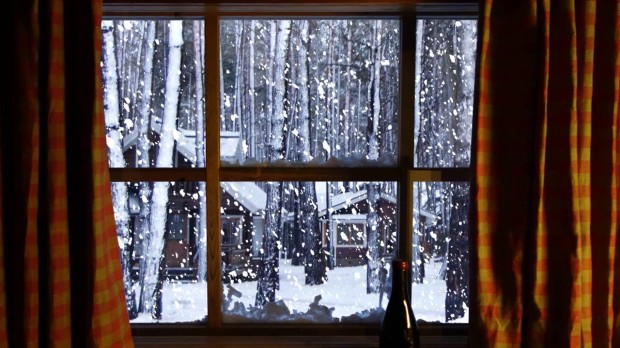 Here’s the song’s signature recording, sung by the Chairman of the Board himself:

Let It Snow was written by Sammy Cahn and Jule Styne, a songwriting duo that would go on to be one of Frank Sinatra’s favorites. Let It Snow, however, was written before their relationship with Sinatra, back in 1945. The pair wrote in on a summer day during what was at the time the hottest heatwave in Los Angeles’s recorded history. Unlike other Jewish-penned holiday standards from that era, Cahn and Styne never considered that it might become a holiday song. According to both their biographies, they wrote it as a way to imagine cooler weather away from their non-air-conditioned hotel.

After the song was complete, they offered it on a lark to Vaughn Monroe, assuming he’d never go for it. Vaughn surprised everyone by buying it immediately, and then surprised no one by making it into a gold record, because that’s what Vaughn Monroe did.

Chances are you’ve never heard of Vaughn Monroe. If you have, you’re one of maybe three people I’ve ever met who has. Which, in its own way, is damn peculiar. For decades, Monroe was one of the biggest celebrities in the country, and kind of the cat’s pajamas.

Tall and handsome, Monroe became a hugely successful singer and bandleader in the 1940s.  Songwriters everywhere were begging him to record their numbers, because Monroe had a reputation for effortlessly churning out hits. In fact, here’s a bit of Vaughn Monroe holiday music trivia: Johnny Marks wrote the classic Rudolph the Red Nosed Reindeer specifically for Monroe. He brought it to Gene Autry only after Monroe rejected it.

For a while he became a movie star. He hosted his own CBS variety show, and performed as a Special Guest Star on shows as disparate as American Bandstand, The Honeymooners, The Dick Van Dyke Show, and Bonanza. He is credited with “discovering” Neils Sedaka and Diamond, and has multiple stars on Hollywood’s Walk of Fame. When he had some spare time, he wrote best-selling childrens’ books.

He was also highly eccentric. He became a pilot and would fly himself, celebrities, and reporters around the country to various dinners and shows. During one point in his life he became obsessed with the hobby of building and collecting model trains. He would take his model train collection with him wherever he went, including on tour and into recording studios.

That such a notable world-famous celebrity isn’t remembered today, by seemingly anyone, is something of a puzzler.

There’s not a tremendous amount of history surrounding the actual song Let It Snow, so today I thought I’d simply present a couple of great alternative renditions of the classic. Most recordings of Let It Snow sound like Sinatra karaokes, so those that try to be different really stand out.

For those who like things a little slower and more intimate, Christina Perri’s version is just the thing:

For those who crave a New Orleans vibe, you can’t go wrong with the Wynton Marsalis Septet:

And of course, there’s the Jean Luc Picard version: