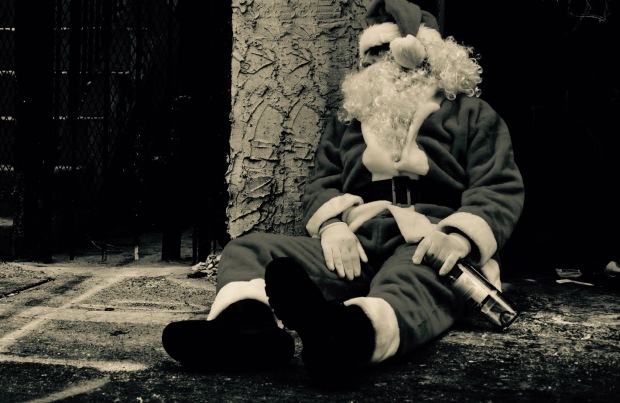 More than any other selection on our Advent Calendar, it’s hard to know exactly what to make of The Pogue’s Fairytale of New York.  And in fact, this is as good a time as any to note — indeed, for the first time during this series — that, due to language, the video below is probably NSFW.

Not having grown up in the UK, I was unsure for years if Fairytale was meant to be a Christmas song, or merely one of those songs that happened to have the word “Christmas” in it. (Like Ben Fold’s Brick, for example.) Fairytale did not get the airplay in the States that it did in Great Britain, and so for years it was simply a favorite track on the non-holiday album If I Should Fall From Grace With God. It would be almost twenty years after I first heard the album that I began to hear the song on the radio during the holidays and noticed it being covered on other artist’s holiday albums.

As it turns out, the song was in fact written to be a holiday single, and has been treated as one in the UK since its release.

Fairytale is meant to be sung in two parts, male and female, similar to Baby It’s Cold Outside. Also like Baby It’s Cold Outside, for some, listening to Fairytale can be troubling if not triggering. While Loesser’s classic duo infers first love (or first lust, anyway), however, Fairytale gives a glimpse into a toxic relationship between long-together lovers, which over the years has rotted into mutual pain and hostility. Each of the lovers remembers the sweeping passion that overtook them on the drunken December night that brought them together, but at this point all they have for one another is resentment.

“I could have been someone,” laments the male singer, blaming his life’s failures on his partner.

“Well, so could anyone,” the female replies, equally disgusted with his lack of success.

And that’s about the nicest exchange the two can muster. The song’s lyrics are as thoroughly depressing as its melody is sublime.

In the original, the two parts are sung by Pogues’ frontman Shane MacGowan and guest Kristy McColl, a pairing that adds to the song’s darkness once you know a little about the biographies of each.

MacGowan always insisted the male part in Fairytale was never meant to be taken as autobiographical, but even if that’s true it might as well have been. MacGowan was anti-social to the point of self-parody. He was willing to spout off offensive remarks toward any group or individual whenever he was fall-over drunk, which at the time Fairytale was recorded was pretty much all of the time. More often that not, he would show up to press interviews plowed off his gourd, replying to questions with slurred and incoherent answers.  By all accounts the rest of The Pogues thoroughly despised him, and they finally kicked him out of the band in 1992. His substance abuse was so bad that in 2001 friend Sinead O’Connor reported him to the police for possession of heroin in an attempt to force intervention. Two years ago, presumably under the influence, McGowan passed out while driving. His subsequent accident left him in a wheelchair for over a year.

Kristy MacColl was the wife of If I Should Fall From Grace With God’s producer, Steve Lillywhite.  Relatively unknown at the time, her biggest claim to musical fame after Fairytale outside of the UK is as the songwriter of Tracy Ulman’s hit song They Don’t Know.  During the week before Christmas of 2000 MacColl would take a holiday with her children in Cozumel, Mexico.  While swimming at Chankanaab Reef she would be struck by a motor boat and killed.

In the UK, MacColl’s death is something of a controversy.

The area where she was swimming had restrictions on motorboats, and the vessel that killed MacColl was clearly in violation of the law.  The boat belonged to Mexican grocery store magnate Guillermo González Nova, president and part-majority owner of the $4.5 billion chain Comercial Mexicana. Nova was on board at the time of the accident, and according to witnesses (including some of the boat’s passengers) was at the wheel when it struck MacColl.

Under Mexican law, you can escape jail time for certain crimes by paying a percentage of your annual wages to both the state and the victim, and this arrangement includes the crime of manslaughter. After the accident, a low-wage Comercial Mexicana employee claimed that he and not Nova was the pilot at the time. Because of his low wages, the employee escaped jail time by paying the Mexican government the equivalent of $90 US dollars, and MacColl’s estate the equivalent of $2,150.  Pretty much everyone assumed at the time that the fix was in.

At various times this story gets re-reported, and public outcries ensue. Each time this happens the Mexican government publically announces that it will take immediate action. To date, it has done nothing.

The lives and deaths of its singers aside, Fairytale is also somewhat controversial due to its language. When the song was first aired in 1987, the BBC dubbed out two words: “slut” and “f**got.”  After public outcry about the removal, the BBC switched course and reinstated the offending language for on-air play. MacGowan, who wrote the song with Jem Finer, went on record as finding the whole thing “amusing,” noting that in their home of Ireland, the word f**got referred to someone lazy.

Despite all of this, however, Fairy Tale of New York is one of my all-time favorite holiday songs.

For those wishing a different take on this modern classic, here is a version from Florence and the Machine with Billy Bragg:

And for those like me who have long wished for a quality cover with Pogues-like instrumentation that avoids the “F” word altogether, here’s a great version by the always fabulous K.T. Tunstall which replaces that word with “blaggard.”