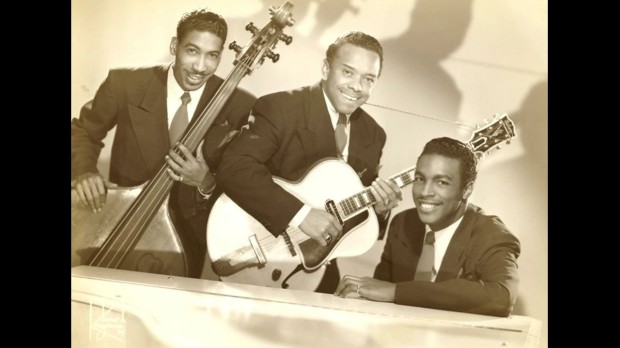 Merry Christmas Baby is my favorite modern-era Christmas song of all time, hand down. Before you read any further, in fact, you should just stop whatever you’re doing and give it a listen.

The song was penned by the R&B guitar legend Johnny Moore with a little help from his friend Lou Baxter, and was first recorded by Moore’s band, Johnny Moore’s Three Blazers. Moore was the older brother of another R&B legend, pianist Oscar Moore. Each of the Moore boys was endowed with an abundance of musical talent and egos to match. It is something of a curse, therefore, that each of these great musicians was destined to be overshadowed by the iconic ones they played with in their early careers.

Oscar was the original pianist for the Nat King Cole Trio, and would be Cole’s sole keyboardist from 1937-47. He left the group as it was just beginning to achieve white, mainstream popularity, believing that it was his genius and not Cole’s that was attracting the public’s attention. His subsequent solo career was entirely uneventful. He spent the last decades of his working years as a bricklayer in Los Angeles.

Johnny Moore’s career path would end up being eerily similar to his brother’s. Johnny’s band had several hits, including Merry Christmas Baby. Along with T Bone Walker and Louis Jordan, the Three Blazers’ music both towered over and defined the 1940s R&B scene. This success was grating for Moore, however, because the band member that crowds most went wild over was his pianist-vocalist, Charles Brown. Brown’s popularity so bothered Moore that when the band released records Moore would make sure that he and drummer Eddie Moore would be credited under band personnel on the record jacket, but Brown’s name would be curiously and conspicuously absent. Eventually, Moore would tire of playing second fiddle and left to pursue a solo career. He had some minor success over the next decade, but by the time of his death in 1969 he had already drifted off into obscurity.

Brown, of course, would go on to have a string of hit R&B singles in the 1950s, and put out no less than sixteen commercially successful albums over a forty-year period.  It is his rerecording of Moore’s song that is now considered to be the iconic version of Merry Christmas Baby.  And in 1960 he had another chart-topping single that has also become a modern holiday standard, the equally bluesy Please Come Home for Christmas.

Many artists have covered Merry Christmas Baby, and quite a few of those are fantastic: Ray Charles made the song sultry; Bonnie Raitt made it erotic; Sheryl Crow and Eric Clapton made it joyful; Colbie Caillat made it indie; Wanda Jackson made it naughty; Springsteen made it an anthem. Indeed, the evidence of Moore’s genius is revealed in just how much harder it is to find an terrible cover of Merry Christmas Baby than it is a good or even great one. Merry Christmas Baby is the only Christmas song I can think of, modern or otherwise, that can make this claim.

Still, the iconic Charles Brown version is still my favorite.  It has a kind of sad, melancholy edge that other versions lack.  When other artists sing the line,

“Well, I haven’t had a drink this morning,

But I’m all lit up like a Christmas tree”

it feels like a profession of joy.  When Brown sings it, however, you get the sense of someone desperately trying to convince a loved one that he hasn’t been drinking all morning, when in fact he has already fallen into the bottom of a bottle.

Brown’s voice is what whisky would sound like if it could sing, and for all of these reasons Merry Christmas Baby is a must for our Virtual Musical Advent Calendar, and really any other holiday music playlist.